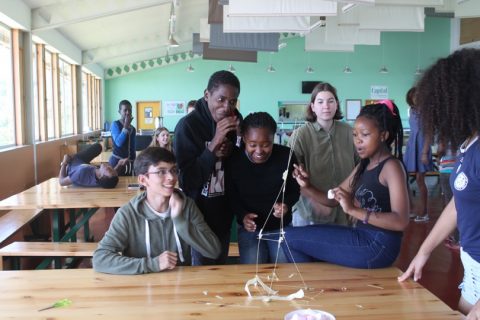 Participants dragged themselves of the bed, still weary from the hike, to find that today was Arts and Development Day. It was a day of drama and theatrics, arts and creativity. We explored the role of the arts in development, and how they can contribute to the process.

We started the morning with a presentation on the role of arts and culture in development. We continued with the Marshmallow Challenge, a creative exercise where participants work in teams to build the tallest possible tower that can hold up a marshmallow. The only catch is they have to build it out of spaghetti, string, and tape. It was no easy feat, and the team with the highest tower could not sustain a marshmallow for over 3 seconds. Instead another team, who built a slightly less ambitious, but more structurally sound tower, took home the prize.

Later in the morning, we considered how images can shape how we view the world. We looked, for example, at how magazines like The Economist and Time portrayed Africa as the dark and hopeless continent in ’90s, but later transitioned to much more hopeful language, like Africa Rising. The difference in the imagery was stark, informing a very different vision of the continent.

The afternoon session involved more theatre, as we explored how movement and tableau can be used as a conflict resolution mechanism. We did exercises from Theatre of the Oppressed and Theatre for Living, and discussed how such methods can be used to transform communities. In one exercise, for example, the participants visually portrayed the values they defined for themselves. They then used theatre to discuss challenges with the group and explored how to address them in the coming week. 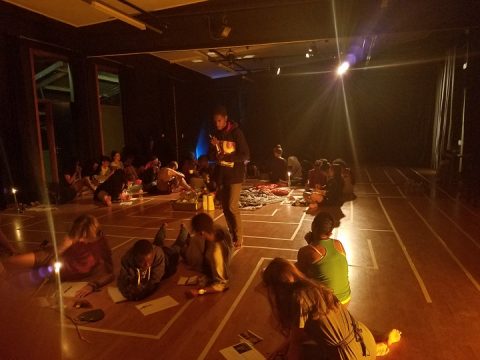 Finally, the evening session involved a reflection exercise called The Labyrinth. In it, participants walked a meditative labyrinth, stopping at various stations to consider questions about their lives and themselves. Their childhoods. Their frustrations. Their self image. Gratitude. Their future. The experience was both incredibly informative and intense. It took an enormous amount of self-reflection and introspection, and visibly moved many. We’re constantly impressed at the internal fortitude of our participants, and their endurance during the multi-hour reflection session was no exception.

Tomorrow we head out to our community stays. We will not have internet access, so the blog will be quiet until we return on Tuesday evening. We’ll update you then!