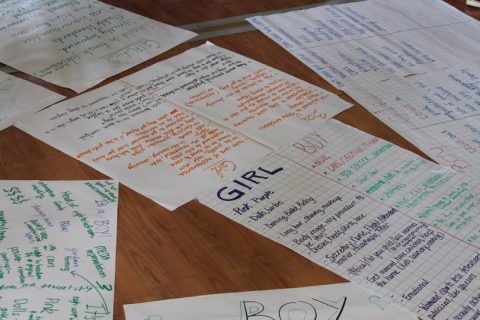 We had a special treat for breakfast today—pancakes, made especially for us by one of our student teams. They spent last evening prepping and woke up extra early to cook. Everyone was grateful for the little extra pick-me-up to start the morning.

It was Gender and Development day, so we spent it discussing gender as a barrier to development. The morning’s session featured a fascinating exercise called, “It’s a Boy! It’s a Girl!” focused on the various stereotypes and expectations we assign to children as soon as they’re born. For example, pink for girls, blue for boys. Niceness to girls, toughness to boys. We discussed double standards women face and the toxic ways in which expectations of masculinity affect boys.

In a day of special treats, our afternoon session stood out. We received a visit from Nonduduzo Ndlovu, an inspiring guest speaker. She runs an organization called Connections for Change, and is also a mentor to young people across Swaziland. In 2017, she was awarded the Queen’s Young Leader Award. She talked about the position of women in Swaziland, drawing a bleak picture of the tensions between the country’s Constitution and customary law. She spoke, for example, of the inability of Swazi women to own Swazi National Land and inherit, and of the many forms of abuse they endure. She peppered her presentation with moving personal examples and shocking statistics that brought the issues to life. Many of the Swazi students were so moved, they lined up to talk to (and hug) her afterwards. 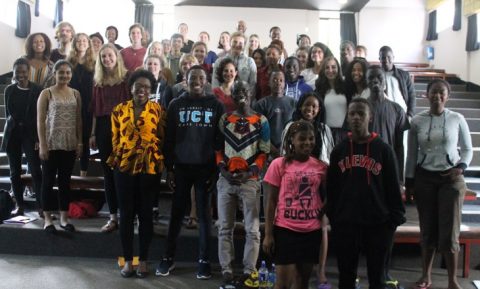 She insisted that gender-based violence is not just a system perpetrated by men, but also by women, and that for change to occur, it must be at a societal level, and inclusive of everyone.

The afternoon session examined further issues of gender-based violence, rape, and more upliftingly, consent. We did an exercise that had participants place themselves on an agree-disagree spectrum on statements like: 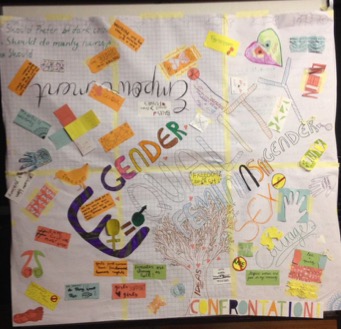 These statements sparked fascinating debate, ranging from biblical justifications for distinguishing gender roles to fierce defenses of feminism. We ended the afternoon with some theatre, considering various situations and constructive ways to deescalate conflict.

At the end of the evening, the participants created a community pledge for gender equality.

It was an intense and engaging day, one marked by both frustration (at the state of the world) and hope (for the future). Tomorrow we move on to a similarly intense topic—the environment.