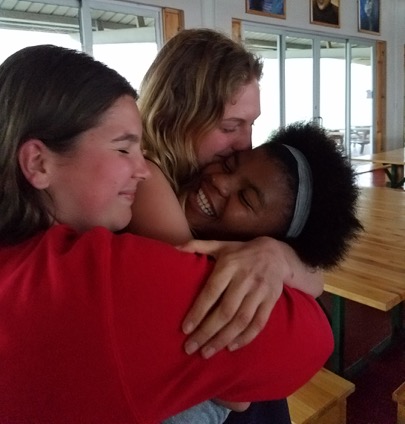 Today was like a reunion. We all came back from our various community stays and you would have thought we hadn’t seen each other for years! There were group hugs and shrieks of joy and just overwhelming happiness at seeing each other again after two whole days apart.

We have a special treat today, as several of our student reporters have written about their experiences at each of their community stays. As a reminder, here are the projects we visited: 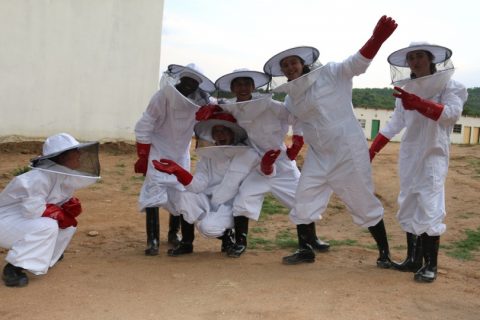 Bee-keeping during an insane thunderstorm, collecting and judging thousands of green beans, screaming pigs, and interacting with a cohort of friendly, down-to-earth young people were only few of the many memorable moments during our brief community stay project at Manzini Youth Care.

Beginning with our arrival at the MYC agricultural project, our team consisting of Benjamin, Rafaela, Jasmin, Neliso, Annelot, Pablo and I, plus facilitators Wadeisor and Siya, instantly bonded during our day’s work harvesting (so many!) organic green beans. As temporary volunteers, we contributed to the farm, where MYC young people learn agricultural skills imperative for working and running small businesses of their own. The organization provides the students with ample resources and opportunities to grow through the 15 week programme, which was positive to learn. The farming itself is a sobering reminder of the intensive farm to table process, which really makes you appreciate where your food comes from.

Our Monday afternoon continued with a crash-course in pig management and beekeeping, which was prematurely ended by a phenomenal, electric thunderstorm. The rain was wonderful.

Following a rough night of mosquitos and intense heat, we shared a light-hearted and rewarding visit at the Exiting Halls of the MYC. We were welcomed kindly by both the care-workers and young people, who shared insights about their journey through the MYC orphanages and their tangible plans for the future. The organization as a whole seems to be having a majorly positive impact on the futures of these unfortunately disadvantaged young people and it would be great to see more of these projects grow and aid in developing Swaziland’s future.

As a tightly-knit group (or should I say family), we certainly took in some valuable information and very much enjoyed ourselves. We thank Masheshe, Uncle Robert, and the staff at MYC for accommodating our stay, and to dear Siya for organizing it. 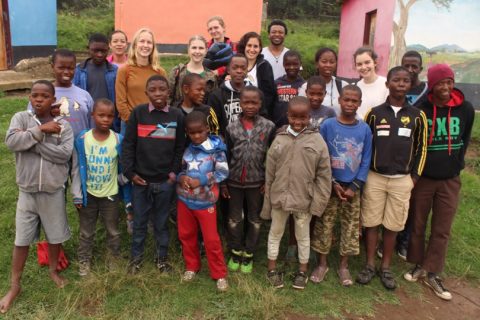 Our group visited an orphanage called Motshane Hope House. The organization provides a place to live for about 15 children, offers free meals for children living nearby, and also runs a preschool.

As we arrived, we saw brightly painted houses scattered on a mountainside, beautiful views of the valley, and a bunch of energetic kids running around the place. We were asked to help with clearing an abandoned house that is planned to be turned into an office building, cleaning up a chicken house and doing some gardening. We completed those tasks pretty quickly, thanks to help from the children, so we got to spend most of the time hanging around and playing with them. The children taught us their favorite games like three sticks and playing with marbles. We had a football match. On Monday night there was a thunderstorm, so we went inside to draw and watch a movie and when electricity ran out, we gathered around the table to tell stories in the candlelight.

We discussed our experience at Hope House as a group and many people said that it made them grateful for all they have, more aware of their privileges, and wanting to do more to help others. There are certainly many things that could be improved at Hope House—at the moment they don’t have tap water so they have to walk down the road to get water from a well. Additionally, a broken chimney fills the whole main building with smoke when they start cooking. But I was impressed by the warm atmosphere the place had—the people working at Hope House seemed to truly care about the children and do their best, and the playing children’s smiles, laughs and winning dances felt very real too. 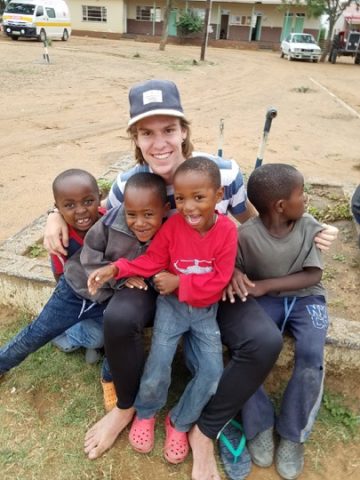 Mpaka Refugee Camp in Swaziland houses around 370 people from several African countries, most notably Burundi, Congo, and Rwanda—countries with violent conflict and political unrest. For 2 days and nights, 11 short course participants and coordinators visited the camp to meet with youth to discuss topics such as gender equality and social and cultural norms.

Residents of the Mpaka camp welcomed us warmly and shared their homes and stories. Despite experiencing unimaginable grief and loss, many refugees approached life with incredible optimism and gratitude for what they have. Nearly all the youth described lofty ambitions—to become doctors, lawyers, and activists for social change.

The most powerful difference one can make during a visit to a refugee camp is the exchange of friendship and ideas. We wanted to eliminate the stereotype that charity from outside sources will “save” Africa and rather see how empowered youth in these struggling communities can create peace and positive change of their own. While the people livening the Mpaka Refugee Camp may lack some of the comforts of modern life, they possess a drive for success that is unparalleled and inspiring to everyone who visits. 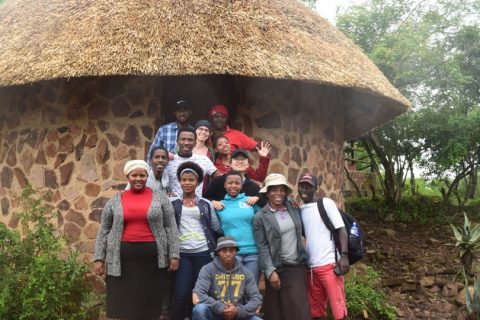 Eight determined participants, led by two coordinators, Shakes and Lea, went to the Shewula Mountain Camp, the first eco-tourism project in Swaziland, located a few kilometers away from the Swazi/ Mozambican border. The Mountain Camp is considered one of the most successful in the Southern African Region and is owned by the Shewula community, meaning that all profits are shared amongst the community.

After a 3-hour long drive, whilst passing the Hlane Game Reserve, the group was thrilled to see wild animals including elephants, wildebeests, antelopes and giraffes. Upon arrival at the Mountain Camp, the group rested in two of the guests’ rondavels in preparation for the following day’s work.

When the day of community engagement finally arrived, the group spent it with a combination of digging a pipe trench for running water and painting a rondavel. The participants kept each other entertained with amazing melodies, games, dances, and folk-stories throughout the day. After the day’s work, the team had a closer look at some parts of the Shewula community whilst enjoying the spectacular scenic mountains and hills including the beautiful (but crocodile filled!) Mbuluzi river.

The last day of the community project started with zealous melodies and hymns accompanied by a warm morning meal. The intention was to go weeding in one of the community members’ maize meal fields, however, that was cancelled due to bad weather. Instead, the students resumed the previous day’s duties, including assisting in starch roofing two new grass rondavels. Despite intense exhaustion, teamwork persevered, ultimately giving birth to the name #TeamShewula.

The team learned a lot, leading one participate to exclaim, “I have come to realize that no matter what level of life one is from, we all have something to contribute to life.” As the students were getting ready to leave, they struck up a beautiful melody, and many members of the community expressed their gratitude for a warm and exciting visit. 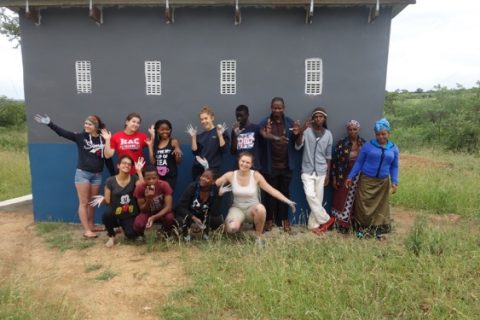 Full of excitement, and unsure of what to expect, we made our way to our community project. We were a group of 10 people from all over the world with the task to paint the buildings at a rural primary school.

We started our little adventure with a challenge—the person who was supposed to welcome us was not present, and could not be reached by phone. After we waited for an hour and a half, and just as we were about to join a different project, we met the headmaster of the school and were let in. Our accommodation was basic—we slept on the floor and had limited running water.

The first evening we established ourselves and got used to the unfamiliar environment. To avoid the worst heat, we woke up early the next day and started painting the first and biggest building, in which the headmaster lived. Some local women came to help us, and together we managed to paint the top of the building. After lunch, we had to take a break to avoid the heat and generally because we were exhausted. Refreshed and with renewed energy we finished the first building. To make the work easier, we listened to music and had conversations about love, feminism, and the world in general.

With the fading light, we attacked the next building—student bathrooms—with our brushes and paint. A nice breeze simplified the work but also brought a thunderstorm. In order to avoid electrocution, we were not allowed to touch running water, which meant no showers, although we were sweaty and covered in paint! After dinner, we decided to have an early night so we could get up early the next morning. Listening to the heavy rainfall and a goodnight story, we finished the first day of our project.

The next and last day was way cooler, so we finished painting in no time, and still had lots of time before the bus picked us up. It was an enriching and exciting experience outside of our comfort zones. Personally, it left me full of satisfaction because of the visible effect we had on the primary school.