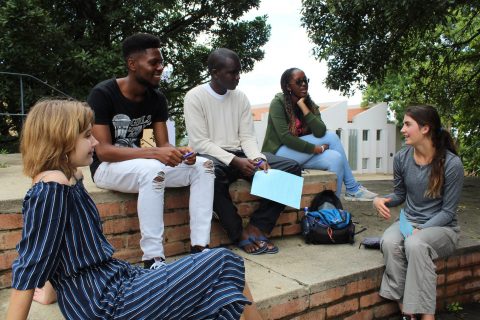 Living in a diverse community is exhilarating, but comes with its own challenges. As we learned today, for example, whereas in some cultures, looking someone in the eyes while speaking to them is considered a sign of engagement, in others, it’s deeply disrespectful. Where some cultures view physical touch as a sign of friendliness, others see it as discomforting. So short courses, with their myriad of cultures and backgrounds, tend to develop their own little cultures, a microcosm of what the world could be if we all just got along.

As facilitators, we have two very clear philosophies on building that culture–first, that if we’re going to be creating something from scratch, we might as well be intentional about what we’re creating. And second, that the values and guidelines that determine our community need to be defined together, with everyone’s input, rather than imposed from above. 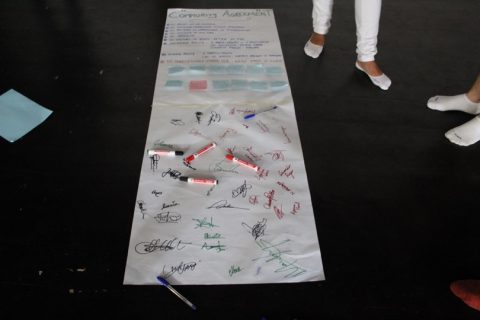 So after getting a few health and safety-related non-negotiables out of the way (no drugs and alcohol, no swimming after dark), we let the participants build the scaffolding for their community. Impressively, they pledged to avoid their cellphones during sessions, be punctual, and respect quiet hours after 10 pm. But more importantly, they pledged to respect each other, to learn from each other’s cultures, and to be self-aware of their actions and their effects on others.

With the Community Agreement defined and signed, we moved on to Dialogue, a workshop that occurs in small groups. The name tells you everything you need to know. It’s about talking past the superficial, and connecting on a deeper level. There are very few spaces in the world where people ask you to think with your heart instead of with your head, and Dialogue is one of them. It’s always an emotional session, as participants let their guard down, allow themselves to be vulnerable, and share some very deep parts of themselves. It’s intense, but we emerge as a stronger community.

We topped the night off on a lighter note, with a delightful introduction to eSwatini, complete with traditional Swazi dances. The night is now winding down, with a friendly (but surprisingly competitive!) game of Uno and some pool in the common room. You’d never guess we’ve only been together a little over 24 hours!